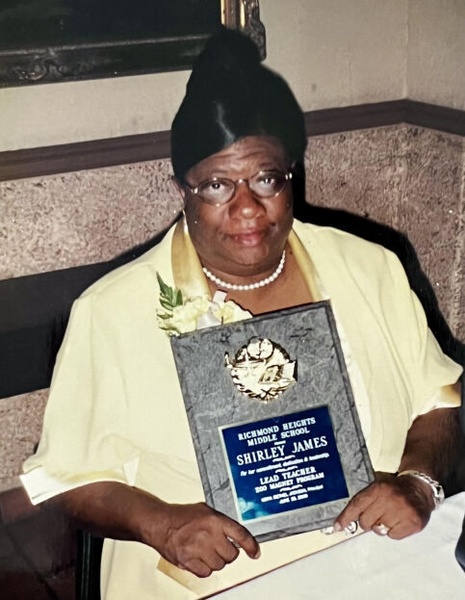 Shirley Ann Hull James transitioned this life for her heavenly home on Friday, August 19, 2022 at St. Joseph's Hospital in Savannah, Georgia. Shirley was the first-born child of the marital union between Joseph Hull II and Zelma Mines Hull Owens. Shirley was 73 years old and lived a very full life. She was born on October 19, 1948.

She was a graduate of Savannah State College (University) where she majored in Biology and received a minor in Chemistry.  Graduate studies included Nova Southeastern University (Nova) in Ft. Lauderdale, Florida. She received both the Master of Education in Science and Specialist in Education (Education Leadership) degrees in 1988 and 1986, respectively (from Nova).  During her undergraduate years at Savannah State College, she joined Alpha Kappa Alpha Sorority, Inc. and later was a charter member for one of the graduate chapters in Dade County, Florida.

Shirley’s brilliance led her to excel as an educator.  Her career began in the public schools of Jasper County, South Carolina. As a very young woman, she relocated to Miami, Florida.  Miami became her beloved home for over thirty years.  Shirley developed and wrote the curriculum, and successfully obtained funding for the Miami-Dade Zoo Magnet Program. She was the Zoo Magnet Program’s lead teacher and facilitator from its inception until her retirement in 2000. For thirteen years Shirley’s program received national recognition. She soon distinguished herself by having one of the few science magnet programs in the nation to have a five-day curriculum.  The program had two sites, a classroom in Richmond Heights Middle School and one at the Miami-Dade Metro Zoo. Two United States Secretaries of Education visited her program, Richard Wilson Riley and Lamar Alexander.

Prior to her retirement, Shirley and three other educators started The Miracle Childcare, Inc. to provide children with excellent pre-school care.  Shirley retired from Miami-Dade County public schools at the age of 50.  Her achievements were celebrated with a proclamation on June 25, 2000 naming that day, Shirley Hull James Day. After retirement, Shirley returned home to Savannah.  She was employed by the Savannah-Chatham County Board of Education and ended her career as an educator, where she began, with Jasper County Public Schools in South Carolina.

The family is so very grateful to her caregivers Kanesha Simms and Jacqueline Kent, and a very special family friend Mary Ann Goldwire.

At Shirley’s request, the family will not have a funeral. Please pray for the family and thank you all for your love and support during this difficult time.

To order memorial trees or send flowers to the family in memory of Ms. Shirley Ann James, please visit our flower store.