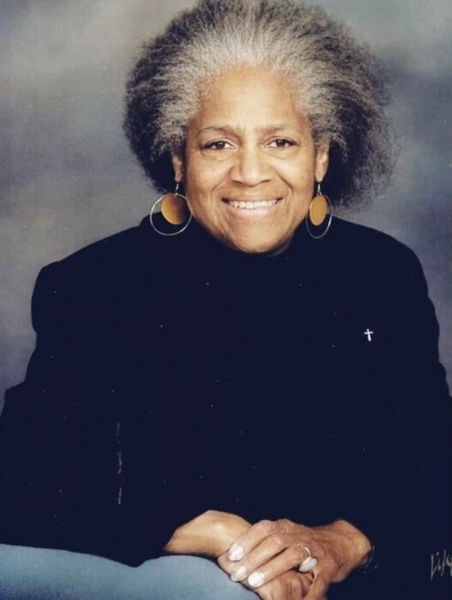 Jacqueline (Jacqui) Jones Anderson was born July 13, 1935 to Ellabelle S. Jones and James Harris in Hartford, Connecticut. She was the oldest of two children, and at a young age developed a desire to increase her knowledge. Jacqui was devoted to her family and service to her community and church. She accepted the Christian faith and joined the Metropolitan AME Zion Church. She attended church regularly.
Jacqui was very entrepreneurial as a young adult where she worked as a model in New York. She also was a co-owner of a real estate business. Jacqui was hired to serve her community as the Neighborhood Youth Corp Director for the Community Renewal Team, CRT. As her acumen for community activism grew, Jacqui took a position as a Health Educator and Community Liaison for Hartford Hospital. She also became actively involved in the local civil rights movement.
Jacqui studied social work and counseling and earned an undergraduate degree from New Hampshire College and a master’s degree from Springfield College. Jacqui was also the First Republican African American female to be elected to City Council in Hartford. She also managed the local election campaign for U.S. Senator Lowell Wicker, who became Governor as a third-party candidate. Jacqui was a member of the Black Republican Club of Greater Hartford, was involved in the West Indian Social Club, The Artist Collective and many other civic and community organizations.
In 1990, after over twenty years of service with Hartford Hospital, Jacqui retired and relocated to Savannah, Georgia. To continue her desire to serve her community, Jacqui was hired as the Director of the Union Mission-Mary Magdalene Project (for Women and Children) for several years. She also changed her church membership to the White Bluff United Methodist Church.
Jacqui was an active member and attended church regularly. She served on the Wesley Community Center, Inc. Board of Directors; served as the District Social Action Coordinator for the United Methodist Women; Sunday School Superintendent; helped develop the Royce Center after school tutorial program and served on many other boards and committees. In acknowledgement of her dedication to youth education, in 2019 The Doctor Jacqui Anderson White Bluff UMC Scholarship was established by the Mission Department and the members of White Bluff UMC.
Jacqui heeded the call of the Lord to continue her educational and spiritual development. In 2016, she earned her Doctor of Philosophy in African American Ministry Degree at the age of 83. Combining her entrepreneurial spirit, love for reading and travel to Mexico and Africa, Jacqui created a Storytelling service. She obtained the certification as a “Griot”, providing the art of storytelling in the African tradition to all ages, specializing in children.
Jacqui transitioned on April 24, 2021 after a full life well lived. She leaves to cherish her memory four loving sons, Wilfred Anderson lll (Betty), Gregori Anderson (Carolyn), Kevin Anderson (Pamela), Kyle Anderson (Sharon); a loving brother, J. Ray Jones (Victoria); Fourteen Grand-Children, Fourteen Great Grand-Children; several treasured cousins; many life long friends and respected colleagues. Jacqui’s mother and father preceded her in death.

To order memorial trees or send flowers to the family in memory of Ms. Jacqueline Anderson, please visit our flower store.