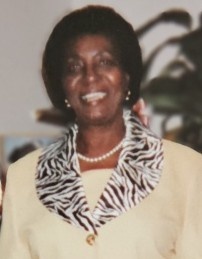 Rosetta “Rozelle” had a special way of lighting up a room with her presence and humor. Before she left she had everyone in the room smiling. She was born on April 26, 1937 to the late Nathan Niles and Sarah Barnard Brown. Rosetta as a young woman grew up in Richmond Hill Ga and graduated from George Washington Carver School in 1956. She was joined in holy matrimony to Willie James Solomon, and to this union 6 children were born. Those children included: Willie James Solomon, Freddie S. Glover, Lillian S. Finch, Anthony Solomon, Alexander Solomon, and Michael Solomon. From this loving family four of her children preceded her in death. Rosetta wanted very much to provide for her family and took on the challenge of gaining her degree in the School of Cosmetology. She took on job as a hostess and later went on to work for K-Mart as a store Manager for over 25 years until her retirement. She worked hard and made many sacrifices to send her daughters to college and her son in the Armed forces. In those days she had to be frugal and made every penny stretch which led her to teach her children a special saying “Spend a penny and save a penny.” Rosetta was a wonderful mother, grandmother, great-grandmother, sister, aunt, and a dear friend to all. She will be lovingly remembered for her infectious smile and sense of humor. Her humble spirit and love for God came from being brought up in a Christian household and instilling those values into her children. She will be land fondly missed. Rosetta leaves to cherish her memory: one son, Willie James Solomon (Wanda) two daughters Freddie S. Glover, Stephanie (Norris) Jenkins. one Son-in-Law Tony Finch. four Granddaughters: Danielle Glover (Savannah), Janay and Traci Finch ( Fayetteville, Ga), Takisha ( Ronald) Henry (Charlotte, NC) and Aisha Solomon (Dallas, TX). Two grandsons Michael (Belkis) and Jarell ( Shonna) Solomon (Miami, FL). Two sisters Gracie (Harry) Greene (Richmond Hill), Patsy Johnson (Savannah). Six brothers: Sam ( Amy) Barnard, Charles Brown, Herman Brown, Willie Brown, and John Brown (Savannah), Charlie Barnard (Richmond Hill). 8 Great Grandchildren: Kam’ron, De’Asya, Mikayah, Marcelo, DeAundria, Dekaviahn, Jarell Jr., Anthony and a host of relatives and Friends.

To order memorial trees or send flowers to the family in memory of Mrs. Rosetta Solomon, please visit our flower store.
Open