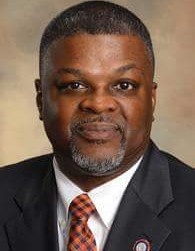 Adams announces the passing of Mr. Edward B. Jolley, 59, who transitioned on Wednesday, February 17, 2021 at his residence.

EDWARD BURDETTE JOLLEY JR., son of the late Rosetta James Jolley and Edward Burnette Jolley, was born April 1, 1961, in Easton, Maryland.  He received his early education in Baltimore City Public Schools and graduated in 1980 from Northwestern High School in Park Heights, Maryland, where he excelled in football and track.

After high school, Edward continued his education, earning the Bachelor of Science degree in accounting from Morgan State University and the Master of Business Administration degree from Regis University. Edward enrolled in the Organization and Leadership doctoral program at the University of Maryland Eastern Shore where his status was ABD (all but dissertation).

Known by his colleagues as “Jolley,” he established himself as a leader at an early age.  While a scholar-athlete in high school, he was employed as a manager at the first black owned McDonald’s established in Baltimore City limits.

Jolley was deeply committed to communities where he lived and to the youth of those communities. He has provided leadership on a broad number of non-profit boards to include the King-Tisdell Cottage Foundation Inc., 100 Black Men of Savannah Inc., The First Tee of Savannah, YMCA of Coastal Georgia and Oglethorpe Charter School. Above all, Jolley was a dedicated husband, father, son, brother, mentor, leader, colleague and friend.

May we never forget his love for God, and family, his humor, his passion for humanity and strive for excellence.

To order memorial trees or send flowers to the family in memory of Mr. Edward Jolley, Jr., please visit our flower store.