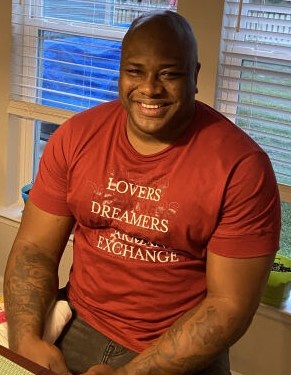 Adams announces the graveside service of Mr. Ashley Carmichael which will be held 11:00 A.M., Saturday, April 3, 2021.

Ashely Joseph Alexander Carmichael was a loving and humble soul who transitioned on March 23, 2021, surrounded by his loving parents Joan and Winston Carmichael. Ashley was a compassionate son, brother, uncle, nephew, cousin and friend. He was born in Stamford, Connecticut, on March 2, 1983.

In his youth, Ashley was athletic, where he played AAU Basketball in Bridgeport, CT. He attended Notre Dame High School in Fairfield, CT, where he played high school football. He then later graduated from Central High School in Bridgeport, CT.  Ashley’s athletic abilities journeyed into his adulthood, where he was passionate about personal health, fitness and wellness. In other words, he was an avid workout junky.

For the last 8 years of Ashley’s life, he served as a merchant marine where he transported cargo all over the world. He was a member of the Seafarers International Union and worked as a “QMED” - a Qualified Member of the Engineering Department.  Ashley took pride in his work and travelled to all 7 continents during his career.  He made it his primary goal to keep in contact with family and friends to share his travel experiences; updating his sister Natasha almost every day no matter where he was.  Ashley was a special and amazing friend, who always spoke his mind and always kept it real to all of those he loved.  He brought value and love to each person he encountered.

Those left behind to cherish his loving memories are: his parents Joan and Winston Carmicheal of Savannah, GA, Natasha L. Archie (only sister and best friend), Charles D. Gamble (brother-in law), Charles L. Gamble (nephew) all of Hollywood, FL; and a host of aunts, uncles, cousins, other relatives and friends. He was preceded in death by his maternal grandparents, Frederick and Lucille Stephenson; paternal grandmother, Monica Wilson; and aunt, Sheryl Stephenson.

To order memorial trees or send flowers to the family in memory of Mr. Ashley Carmichael, please visit our flower store.