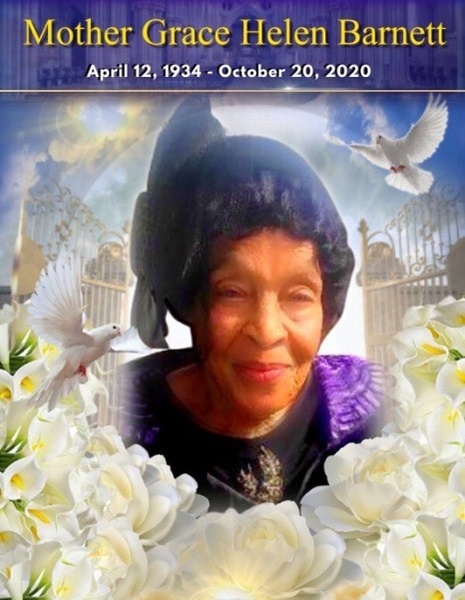 Adams announces the passing of Mother Grace Helen Abney Barnett, 86, who transitioned on Tuesday, October 20, 2020 at her residence.

Grace Helen Barnett was born on April 12, 1934 in Johnston, SC to the late parents James and Arzelle Abney. She was the first born child of this union and the eldest of seven siblings.

In February of 1941, the family moved to Savannah, Georgia; where Grace received her formal education in the Chatham County School District. As a teenager, Grace began her working career as a customer server at Bon Ton’s Bakery. She also worked in the hair salon in Hogan’s Department Store. Reaching for higher heights, Grace decided to attend school to become a certified nursing assistant. Upon successfully completing that training she worked for several years as a CNA with Candler-Telfair Women’s Hospital in the nursery. After leaving that position, she became a private duty caregiver and retired at the age of 62.

On April 14, 1951 Grace married the absolute love of her life, Sam Barnett, Jr., who preceded her in death on March 6, 2012, prior to celebrating 61 years of a blissful marriage. Four Children were born to this union.

In 1961, Grace received the power of the Holy Ghost at Bennett Temple. She later moved her membership to East Savannah Holiness Church of Christ Unto the Lord, Inc. Once saved in Christ she never looked back. She served diligently for the Lord, where she was divinely gifted as an orator. Grace was known throughout the Church organizations to give the welcome that she would write herself as she wanted to personalize each message. They did not come from a book, but from her heart. She was also famous for her poetry recitings. She spoke with so much clarity and conviction, enouncing each and every word. What was so amazing about her poems, is that she recited them all without a piece of paper or note cards for reference, Requests were often made by many other churches, including Bishop Moses Lewis to appear on various occasions.

Grace received two awards from The Church of Christ Holiness Unto The Lord, Inc.; August 19, 2011, “The James Kelly Royal Dedicated Servant Award” and on March 2012 “State Mother of the Georgia Jurisdiction”.

In addition to her God given talents she was also blessed as a wonderful cook.  She would feed anyone at any time that she saw had a need. She was so giving that she actually gave away her meal, which left her without, on more than one occasion. Family, friends and neighbors would often request red rice and fried fish, homemade sour cream pound cakes and banana pudding. Nothing pleased her more than to see others enjoy her meals.

No matter what you may have called her i.e., Momma, Sister, Sister Grace, Mother Grace or Grandma Grace, you always got the same “GRACE”. A woman strong in her belief in Christ and her walk with the Lord, she never changed! Grace’s favorite saying was “every day with Jesus, is sweeter than the day before”.

Preceding her in death were two sisters, Linda V. Stewart and Mildred Rivers; and a brother, Carnell Abney.

To order memorial trees or send flowers to the family in memory of Mother Grace Barnett, please visit our flower store.