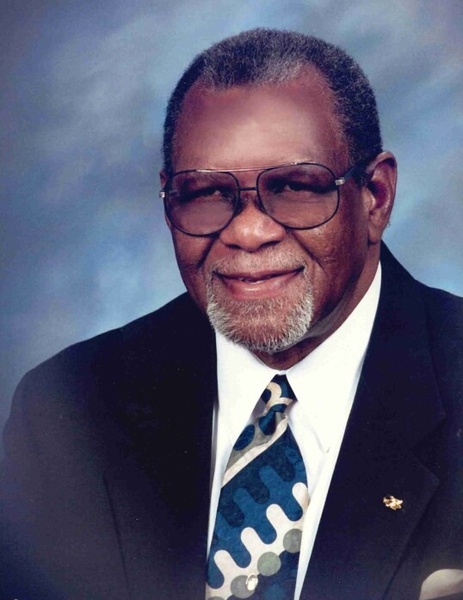 Adams announces the passing of Deacon Floyd E. Morris, Sr., 86, who transitioned on Friday, November 6, 2020 at his residence.

This giant of a man, Floyd E. Morris, was born on July 10, 1934 to Octavia C, Martin Morris and Edwin Charles Morris in Wham, Louisiana.  Raised by Jasper Johnson, his stepfather, he attended Columbia County schools graduating as a three-sport athlete and earning varsity letters in football, basketball and track.  He graduated as the valedictorian of his class in May 1952 and later enrolled at Arkansas AM & N College, now known as the University of Arkansa Pine Bluff.  An excellent orator and scholar, this giant of a man immersed himself into college life as a member of the Student Council, Pan-Hellenic Council, Student Christian Association and the Kappa Alpha Psi Fraternity, Inc., where he served as Polemarch during his senior year.

After graduating with a degree in health and physical education, Morris did a stint in the military and was stationed at Fort Stewart in Hinesville. In the military he continued his love of sports while serving on the base’s football team.

His prowess as a giant grew even stronger once he began a long and distinguished career as an educator and a coach.  He shared his knowledge and wisdom with so many students who readily recognized his ability to pour meaningfully into their lives.  He served as teacher/coach at Sol C. Johnson High School for nine years (1959-1968), five years as head football coach and athletic director at Richard Arnold High School (1968-1972).  He was also a member of the Georgia Independent Association of Savannah Coaches and Officials for ten years.  In 1970, he was appointed as the school district’s Community Education Director where he coordinated the adult education programs. Later he was named Assistant Superintendent for the Division of Support Services for the Savannah Chatham County Board of Education.

Morris received many accolades after his retirement.  I 1995, he was a citation honoree for the Greater Savannah Athletic Hall of Fame; in 2012, he was a citation honoree in the inaugural class of the Johnson High School Athletic Hall of Fame; in 2016, the City of Savannah renamed the football field at Daffin Park from Optimist Field to the Floyd E. Morris Field; and in 2018 he was inducted into the Frank Callen Boys and Girls Club Hall of Fame.

Morris was a devout member of the Historic Second African Baptist Church in downtown Savannah since 1959.  He taught the Adult Class in Sunday School, served as the Superintendent of the Sunday School, and served as a church deacon.  For his labor, his church honored him with the title of Chairman Emeritus in 2001.

His legacy as a giant of giants will be long remembered and cherished by Peggy J. Morris, a niece; Walter J.Morris, Jr. and Mark A..Morris (Veronica) nephews; a host of grand nephews and nieces, cousins, loving friends and hundreds of athletes and students whose lives were impacted and transformed by the example he set and the wisdom he imparted.

To order memorial trees or send flowers to the family in memory of Deacon Floyd Morris, Sr., please visit our flower store.
Open